THE UN Security Council extended the mandate of the more than 18,000-strong peacekeeping mission in Congo — the UN's biggest and most expensive, with a budget over US$1.1 billion — until Dec. 20 with a priority mandate of protecting civilians and supporting "the stabilization and strengthening of state institutions."  Read more below.

Article from The Canadian Press
By AMY SMART
Dated 15 August 2019 - 12:16 PM
Canada sending plane to Uganda to help with peacekeeping in Africa

Photo: Minister of National Defence Minister Harjit Sajjan responds to a question during a news conference in Ottawa, Monday, April 8, 2019. Sajjan is to announce today that a Canadian Forces Hercules transport plane will be sent to Uganda to take part in a United Nations peacekeeping mission. THE CANADIAN PRESS/Adrian Wyld

VANCOUVER - A Canadian Forces Hercules plane will be sent to Uganda to take part in a United Nations peacekeeping mission during the next 12 months, transporting troops, equipment and supplies to Congo and South Sudan.

Defence Minister Harjit Sajjan says the aircraft will be supported by as many as 25 Canadian Armed Forces personnel and it will be used up to five days a month to help the UN mission operating from Entebbe.

In late 2017, Prime Minister Justin Trudeau promised the UN that Canada would send the plane.

It was one of three promises he made when Canada hosted a major peacekeeping summit in Vancouver.

Only one of the promises had been fulfilled, and that was the deployment of a unit of helicopters and military personnel to help with medical evacuations in Mali.

Trudeau also promised the UN a 200-strong "quick reaction force," but Canada has yet to register it in a UN database, which means it has not been formally offered.

In making the announcement on Thursday, Sajjan said Canada committed to a time frame of five years to deploy military resources to support UN peacekeeping missions.

Sajjan said in a statement the plane "will play an important role in helping supply military and police personnel on UN peace operations in the region, with critical resources."

The federal Liberals campaigned in the last election on a promise to renew Canada's commitment and role in peacekeeping in a major way, but have since been accused of not living up to the spirit of that pledge.

The government insists it is committed to peacekeeping, as evidenced by its decision to extend the mission in Mali by one month, which came after pressure from the UN and some of Canada's allies.

Foreign Affairs Minister Chrystia Freeland said adding a plane to the UN mission in Entebbe "is an excellent example of the smart pledges that Canada will continue to support so we can fill critical gaps in UN peacekeeping."

The Security Council extended the mandate of the more than 18,000-strong peacekeeping mission in Congo — the UN's biggest and most expensive, with a budget over US$1.1 billion — until Dec. 20 with a priority mandate of protecting civilians and supporting "the stabilization and strengthening of state institutions."

A fact sheet released last month by the U.S.-based Armed Conflict Location & Event Data Project said there have been nearly 790 "organized political violence events" in more than 420 locations since Tshisekedi's inauguration on Jan. 24. There were nearly 1,900 conflict-related fatalities reported in these events, including over 760 deaths from violence targeting civilians, it said.

I have spent a lifetime seeking and promoting practical ways to help people suffering poverty, homelessness and trauma.  More here below.  Here is the film.

A scheme in Uganda partner dogs with war survivors to help them overcome trauma and Post Traumatic Stress Disorder (PTSD).

Filda was abducted as a child and forced into the LRA rebel army in Uganda, where she witnessed terrible atrocities.

As part of a scheme called The Comfort Dog Project, Filda has been partnered with a dog who was abandoned as a puppy.

The two are now helping each other heal, along with many others like them.

A film by Amelia Martyn-Hemphill for 100 Women.

Note from Congo Watch Editor:  In addition to being a lifelong anti-poverty campaigner, I have spent the past 20 years researching cannabinoid therapy to help people, particularly peacekeepers, military personnel, former child soldiers and other survivors of war struggling with PTSD, trauma and depression. 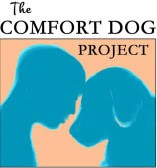 
Dogs have a profound effect on our ability to heal from emotional trauma.  The Comfort Dog Project pairs formerly homeless/neglected dogs with war survivors suffering from Post-Traumatic Stress Disorder.  Psycho-social counseling is coupled with dog companionship and training to create a supportive bond.  For $500, you can help to rehabilitate a dog, place that dog with a war survivor, and enable them to go through our 5 month training program to receive certification as a Comfort Dog.
Posted by Ingrid J. Jones at Saturday, August 24, 2019 No comments: